The History of Cannabis Prohibition

Marijuana, also known as pot or weed, is a derivative of the Cannabis Sativa plant. Marijuana has a long and complicated history around the world and has been used for centuries for medical, spiritual, and recreational purposes. Humans have an ancient connection with it; cannabis use dates back centuries; there is evidence that cannabis was used as far back as the third millennium BC.

The Origins of Cannabis

Evidence suggests that Neolithic tribes harvested wild cannabis for clothes and medicine. The herb was used in various ways, including being smoked, eaten, and even used in treatments for different medical conditions.

The origin of marijuana is primarily unknown, but it is thought to have originated in central Asia around 500 BC. It spread to Central Asia, Africa, China, Europe, and the Americas. It is believed that people first used marijuana in China around 2700 BC. The Chinese used the plant for medical purposes, such as treating pain and gout.

A history of the plant found in China’s history books tells that it was put into graves with the dead to help them in their next life. It is said that ancient Japanese Shinto priests would plant marijuana seeds in their homes to ensure prosperity and peace.

In India, marijuana was used to stimulate the appetite and as a treatment for various illnesses.

In South America, the Incans commonly used marijuana as a religious sacrament. Shamans burned marijuana during ceremonies designed to heal individuals or drive out demons.

Pre-Columbian civilizations in Peru also used marijuana medicinally. It was believed to cure various ailments, from earaches to bad digestion.

Like the Chinese and Indians, South Americans also used marijuana as an anesthetic during surgery.

In Africa, marijuana was used as a spiritual aid for religious ceremonies. In addition to its psychoactive properties, marijuana had other medicinal qualities that tribes all over the continent treasured.

In Egypt, the history of marijuana is both long and mysterious. It was used for medicine, religious rites, and more.

Marijuana was first introduced to the Western world in the early eighteenth century. It was introduced in Jamaica around 1850. From there, marijuana spread to North America and other Caribbean countries.

Eventually, cannabis spread worldwide, being used for everything from food and medicine to fabric.

The History of Cannabis Prohibition

Marijuana and cannabis are often thought to be the same thing; however, the two terms are not exactly interchangeable. Cannabis refers to the broader plant species and can encompass all products made from Cannabis sativa. There are about 170 different cannabis species, including marijuana and hemp.

Often referred to as pot or weed, marijuana is explicitly referring to the products made from dried flowers or buds of the plant. They can include flowers, stems, and leaves. The main psychoactive compound is delta-9-tetrahydrocannabinol or THC. It also contains CBD, while hemp contains no THC and only CBD.

Weed is typically consumed through smoking but may also be ingested and used topically. When smoked, THC enters the bloodstream and travels to the brain. The second most active cannabinoid is cannabidiol (CBD), which does not give the same psychoactive effects as THC.

Today several different strains can be bred to induce different responses in the user. Some strains are designed to help with insomnia, while others are meant to be energizing. Different strains are used for different occasions based on the desired effect. The effects of marijuana may include relaxation, euphoria, increased appetite, altered perception, and impaired judgment.

Marijuana is a drug that has been used for centuries. The first recorded use of marijuana as medication was in 2737 BC by Chinese Emperor Shen Nung. Marijuana was also used as an anesthetic during surgery in Europe and the United States during the 1800s and early 1900s.

Today marijuana is sold as a pain reliever and an alternative to dangerous prescription medications like opioids. Marijuana has been used in various medical conditions, including cancer, glaucoma, HIV/AIDS, chronic pain, and muscle spasms. Marijuana is also effective in treating symptoms caused by chemotherapy and radiation therapy.

Marijuana has many potential medical uses, including:

Today, marijuana is most commonly used for recreational purposes. People enjoy smoking or ingesting marijuana for its psychoactive effects, including euphoria and a sense of relaxation. However, the use of marijuana as a medicine is still hotly debated, with some states legalizing it for medical purposes. In contrast, others restrict all use as a comprehensive drug abuse prevention method.

History of Weed in The United States

Marijuana has a long and complicated history in the United States. Marijuana history in this country has been full of misconceptions and misinformation, which have difficult things further. Racism and bigotry have been connected closely with the account of marijuana, in particular towards minority groups like Mexican Immigrants and African Americans.

Misinformation and bigotry have been vital components of marijuana history. For a long time, people did not understand the drug, leading to some terrible consequences. Marijuana was used as a tool and a scapegoat for crime and violence, and many newspaper articles about crimes were full of references to weed and cannabis.

Marijuana first arrived in the United States in the early 1600s. The Jamestown colonists grew hemp, a variety of cannabis low in THC and do not have psychoactive effects, for use in making ropes, sails, and clothing. George Washington and Thomas Jefferson both grew hemp on their plantations. At that time, marijuana was not used for recreation or medicine but primarily as a textile fiber.

The Politics of Cannabis

The use of marijuana as medicine was threatened by the increasing popularity of pharmaceutical drugs in the early 1900s. In response, the pharmaceutical industry began spreading propaganda linking marijuana to crime and violence.

Marijuana first came to the attention of U.S. officials in the early 1900s. In 1906, California became the first state to outlaw marijuana. By the 1930s, all states had some law against marijuana. The federal government made it illegal to possess or sell marijuana with the passage of the Marijuana Tax Act of 1937. This Marihuana Tax Act effectively criminalized the cannabis plant.

The act was based on a report by Harry Anslinger, the first head of the Federal Bureau of Narcotics. Anslinger was initially appointed to head the bureau by his uncle-in-law, Andrew Mellon, the Secretary of the United States Treasury at that time. Mellon hired Harry Anslinger to target immigrants to line the pockets of his friends in the pharmaceutical industry who were pushing for a prohibition on marijuana.

While it is highly likely that Mellon had no problem with weed, he needed a way to make his friends money. Anslinger and sensationalized fear campaigns like Reefer Madness (1936) convinced the American public that marijuana was hazardous and had to be outlawed. He also claimed stories of people driven insane by marijuana who then committed violent crimes. However, many people believe these claims were complete fabrications.

In 1970, marijuana was listed as a Schedule 1 drug, categorized as highly addictive and dangerous based on being without medical value under the Controlled Substances Act. The list from the Drug Enforcement Administration also includes drugs like heroin. Despite being listed as Schedule 1 illegal drugs under federal marijuana law, marijuana is still used by millions of people for medical purposes in the United States.

CBD has become a prevalent substance and is found in many different markets, including tinctures and remedies for pets. CBD is typically acceptable under all medical marijuana laws and has become a popular over-the-counter option for anxiety, relaxation, pain management, and more for humans and their furry friends. CBD-derived from hemp is legal on the federal level, and cannabis-derived CBD is legal in certain areas dependent on state law.

As mentioned above, marijuana was classified as a Schedule I drug in 1970, meaning that it has a high potential for abuse and no accepted medical use. However, recent and current research has shown that cannabis has medicinal benefits and can help manage certain conditions. There has been a growing movement to legalize marijuana for medical purposes in recent years. In the early 1800s, pot began to be used for medicinal purposes.

People believed it could cure various illnesses, including asthma, cough, and venereal disease. In 1944, the “La Guardia Report” found that marijuana was not a dangerous drug and recommended decriminalizing it. Since then, many people have campaigned for legalizing or decriminalizing marijuana, but there is still no national consensus on the issue.

Recreational Use of Marijuana

Marijuana has been a recreational drug for centuries and is most popularly smoked or eaten to achieve a high. Many products on the market include candies, baked goods, savory snacks, cooking oils, topicals, tablets, personal care items, and more.

Despite growing support, marijuana is still illegal under federal law. The federal government has not yet taken any action to change this, but it is possible that they could do so in the future. Despite the legal status of marijuana, many people use marijuana for both medical and recreational purposes. A recent Gallup poll shows that 55% of Americans support legalizing marijuana, up from 16% in 1969.

The Federal Drug Administration (FDA) has approved the use of prescription-strength CBD in the form of the drug Epidiolex associated with two rare and severe forms of epilepsy, Lennox-Gastaut syndrome, and Dravet syndrome. The drug can be used in patients two years of age and older. Epidolex is the first FDA-approved drug with a purified substance derived from marijuana. 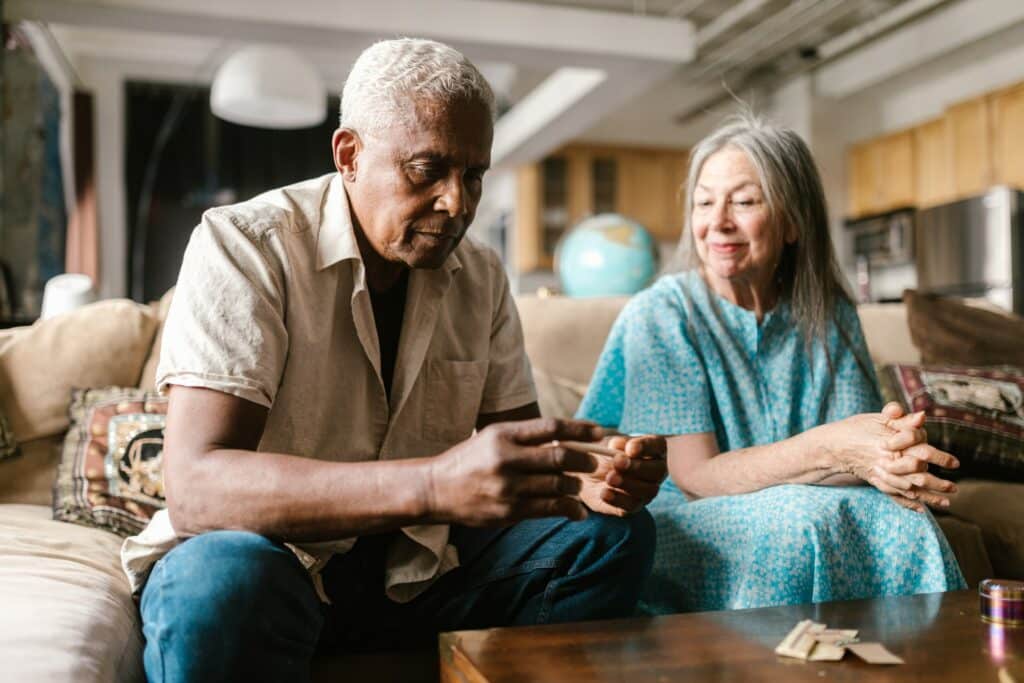 Marijuana is an exciting and complex plant with a long history that is still being written. It has been used for food, medicine, and pleasure by humans for centuries, and its popularity seems to be increasing every year. Whether you support the use of marijuana for recreational or medicinal purposes, there is no doubt that it is a fascinating plant with a long history. As the world continues to learn more about its uses, cannabis history will continue.

You can learn more about the use of medical marijuana on Leafy Doc and connect with a medical professional near you.

How to Make Weed Brownies