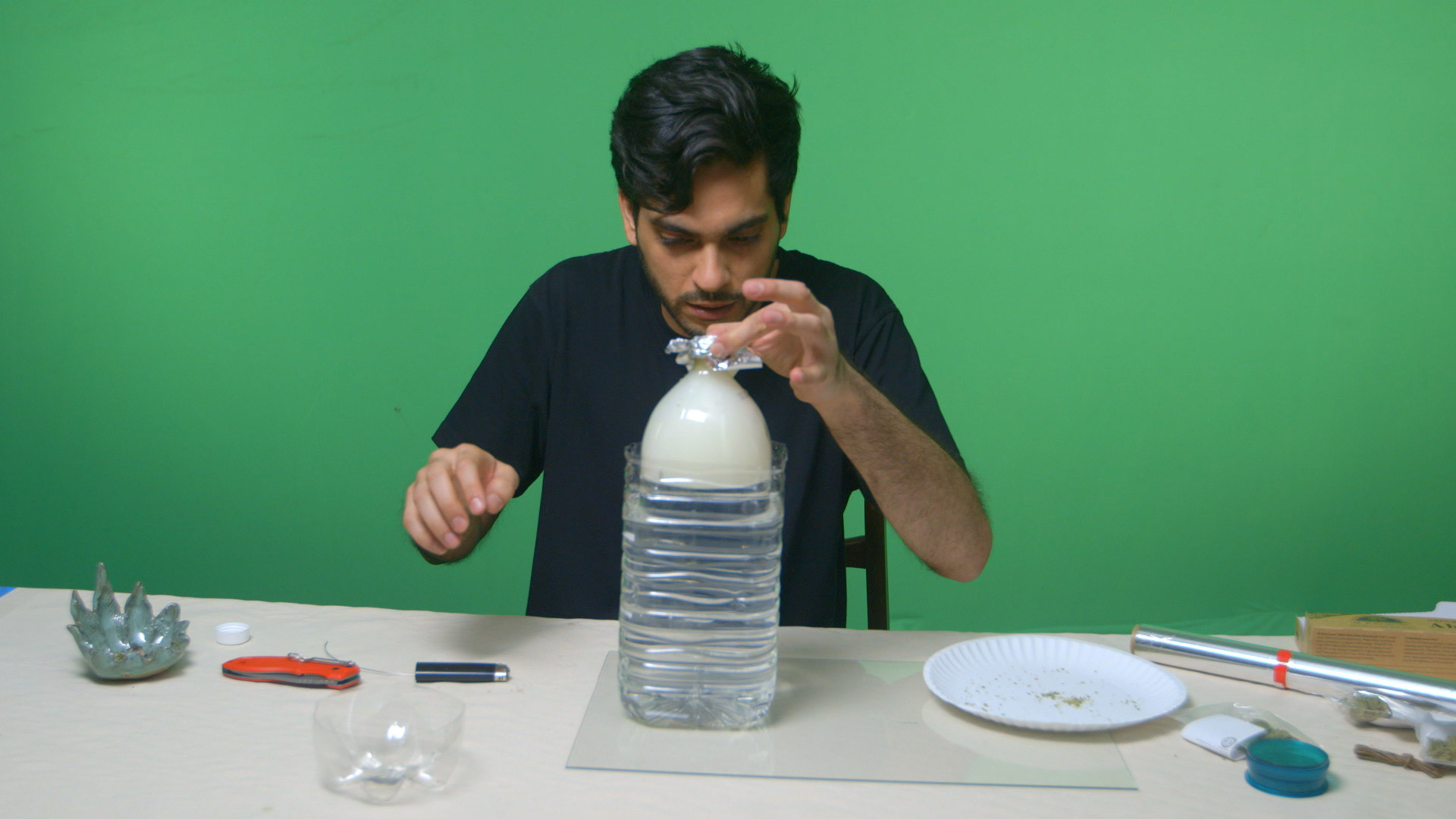 How to Make a Gravity Bong

If you’ve heard of them at all, you may know gravity bongs through celebs like Seth Rogen, or other popular weed connoisseurs. The gravity bongs that stars like Rogen are using however, will cost you a pretty penny. And while these pieces are impressive and very well designed, they contrast greatly from the good old fashioned, cheap DIY gravity bong, the kind that we’ll be talking about today.

Knowing how to make a solid gravity bong could come in handy in situations in which where you’re lacking proper supplies to smoke. Not to mention, you’ll may even impress some onlookers. For example, let’s say you’re all out of papers or wraps or your bong breaks, leaving only the bowl piece. This is a great time to check your recycling and see if there are any single use plastic bottles that can be used for this very easy and entertaining craft. While there’s many different types of homemade bongs out there, but this one always takes the cake.

Making your very own gravity bong

The first step of this process will be to cut up your empty plastic bottles. Begin with cutting the top your gallon water jug so that the neck is completely removed. This will be called, the tub.

With the smaller bottle, you’ll do the opposite, meaning you will cut off the bottom of the bottle, which will be referred to as the chamber, since it’s the piece that will be filling up with smoke.

After this, you should be left with two empty plastic bottles that will function as the two components of your gravity bong. Finally, fill the tub up with water, place the chamber piece into the tub, and voila, your gravity bong is mostly assembled.

Now that your gravity bong is assembled, it’s time to take a hit. Fair warning, this is not your average bong rip. As you’ll see, this setup creates quite a bit of smoke, and can send even the most experienced stoners into a coughing fit. So in this case, probably not the best smoking device for new cannabis consumers.

If you have a bowl piece that you typically use for a bong, it’ll work perfect for this as well. If you don’t, not to worry, you can simply use aluminum foil as a bowl, and poke holes in it. This is definitely the DIY way to do it, and great for building in a pinch.

Pro tip: if you’re really trying to get a tight seal, you can retrieve the bottle cap, cut a hole in it, and insert the bowl piece into the cap. With this, you’ll have an air tight seal that you can screw on and off as you take the hit.

Now that you’ve packed your bowl, and your chamber is lowered down into the tub, you can place the bowl in the bottle opening. IMPORTANT: Ensure that the chamber is all the way down in the tub BEFORE you place the bowl piece in. This will make sure the air pressure doesn’t send your weed flying into the air. Also make sure that the bowl fits in securely, and forms a tight seal. Otherwise, the gravity effect will be lessened.

Now, here’s where finesse comes into play. Unlike a traditional bong rip, where your breath is what’s doing the work, this method uses gravity, hence the name. As you light the bowl, you’ll need to slowly pull (with an emphasis on slowly), the chamber out of the water. This combination of lifting and lighting will cause the smoke to collect in the chamber, filling up with more smoke with each second. It’s important not to lift the chamber too high or fast that you lose the smoke. Once you’ve lifted the chamber as high as it’ll go, it’s time to remove the bowl piece, and start sucking.

As you begin sucking, you’ll want to push the chamber back down into the water. This will push the heavily concentrated smoke into your lungs as your breathing in. Because of how effective this system is, consider using less weed at a time as you gauge your ability to handle it. Remember that due to the slowness of the ignition, the entire bowl will end up being lit by the end of the hit. In addition, be cautious not to slam the tub down too quickly or you’ll end up with a mouthful of water.

Similar to the one we’ve just explained, a waterfall gravity bong uses similar physics. Instead of having a tub and chamber system however, you’ll just need one bottle. Rather than cutting, you’ll simply puncture an empty plastic bottle at the bottom of the bottle, which will serve as your shotgun hole. The top of the bottle will have the same setup as the regular gravity bong, with a bowl piece fastened on top. Again, ensure that there’s a tight seal, otherwise, the effect won’t work as well.

Once you’ve filled the bottle with water with your finger over the shotgun hole, you’re ready for the hit. Just like before, light the bowl of weed and take your finger off the shotgun hole. You’ll want to do this over the sink, outside, or over some kind of bucket. As the water spills out of the bottle, the bottle will fill up with smoke, then when it’s full, you can unscrew the cap, and take the hit. The biggest difference between this and the regular gravity bong is that you won’t have to push smoke into your lungs, rather, you just suck it in like you would with a bong.

Like we mentioned earlier, gravity bongs really pack smoke into your lungs, meaning it will get you higher, and faster than your average hit.

Plastic bottles contain PET or polyethylene terephthalate, so make sure you only light your bowl piece, and not any part of the plastic bottle. If you’re not careful, some of those toxins could end up in the smoke that you’re inhaling. This is why some cannabis consumers prefer smoke cannabis out of glass bongs or silicone smoking devices, rather than a plastic bottle.

The homemade gravity bong that we’ve just described is bigger than other smoking devices. Now that you know how to make a gravity bong, this same process can be repeated on a smaller scale, using a 1 liter bottle instead. As long as the chamber and the tub fit snugly together, you can get creative with whatever bottles you want to use, which is why some have affectionately called these bucket bongs. Because as always, the bigger the bottle, the bigger the smoke.

Like a real bong, gravity bongs can get pretty dirty after enough hits, so know when it’s time to give up and build another gravity bong. They can also be pretty stinky, so it may not the most discreet piece in your arsenal.

Whether you call it a gravity bong, a bucket bong, or GEEB, we can all agree that a gravity bong makes for a fun DIY project, and a great improvisational solution for a smoke sesh. Reusing water bottles is both environmentally friendly and easy to do, and you can customize your set up using any two plastic bottles that fit together. Many homemade bongs can be dangerous if you mistakenly light any part of the plastic materials, so always use discretion when smoking. While a gravity bong hit is efficient, it can also be overwhelming, so be sure that whichever strain you’re smoking is one that you’re comfortable with. And as always, be safe, and have fun.